Whenever I talk to people about my triathlon training/competition schedule, I invariably get the same response from everyone:

Them: "Oh, that sounds like so much fun! I'd do one, but I'm a terrible swimmer."

Promise you won't tell anyone else?

No, I'm serious. My first triathlon was the product of my husband telling me that he didn't have any interest in running any further road races with me, but that he was very interested in trying his hand at triathlon. We picked a date, gathered a crew (his younger sister and her then-fiance-now-husband) to join us on our misadventures, and set out to start training.

The triathlon in question was the Dave Parcells Sprint Triathlon in Madison, CT, and was set for September 9, 2017. My first time in the pool? July 12.

I didn't really think that one through, but let's be fair, I had just come off of training for my first half marathon at the end of May, and then my husband and I got married, and then we spent 2 weeks in Spain. There wasn't a whole lot of official training or thinking going on at any point there.

Back to the pool. I am not a terrible swimmer. I was on the YMCA swim team as a child, where my specialty was the backstroke. I got out of that when I started spending more time horseback riding, and my last time turning laps in the pool before this session was probably 15 years ago.

No sweat, right? It's just like riding a bike! I figured I would be fine.

I was so, so very wrong.

It took me 10 minutes to swim 200 yards. Pro: I didn't drown. Con: the swim portion of a sprint triathlon is 880 yards. Unless I still wanted to be swimming when my friends were crossing the finish line, I needed to get my butt in gear.

Thankfully, my husband's younger sister is an awesome swimmer, and she graciously agreed to coach all of us. I have no doubt that she is the reason I am not still clinging to the swim buoys for dear life today. Over the following weeks, we all improved vastly, and we were ready to take on race day.

September 9th dawned cold, early, and beautiful. I mean, one of those incredible crisp late Summer days where everything is still and perfect.

I, of course, was terrified. There were 4 of us in our group, and none of us had the faintest idea what we were supposed to do. We had overpacked adequately according to the checklists I had made during the week prior, and were trying to figure out the optimal placement for all of our items in the transition area. Did we need socks? Should the bike helmet go on the handlebars or on the seat of the bike? Snacks? Shoes on the left or right side of the bike? And how many times were we supposed to draw our numbers on our bodies*?

We got our wetsuits on (thank you, Body Glide), and waddled over to the water. It was a standing start, so we needed to get in position. To our delight, the water was warmer than the air, and once we discovered that we weren't keen to get back out. There were 4 waves of athletes going off, and since we were all first-timers, we were luckily placed in the 4th wave. The gun went off for each wave, and I just floated and watched, getting a little more nervous with each passing minute. I began to position myself towards the back of the pack, on the outside, so that I was less likely to tangle with any other swimmer. 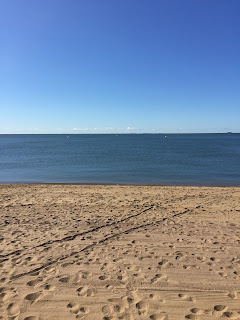 Can you see the first buoy? No? It's the little yellow speck to the left.

When we were finally given the go-ahead, I took off at a strong doggy paddle.

Yes. Really. I tried to cover some ground in free style, but I kept losing my bearings and was veering off-course wildly every time I put my head down. I alternated between a few strokes of freestyle, poking my head up to correct my course, and then getting back to work. I won't lie to you -- 880 yards is a really far way to swim. It's not impossible, but it can be hard and intimidating. After inhaling a good amount of seawater, I switched to backstroke. This was a good rest, but I was again swimming off course. I rounded the first buoy and switched back to freestyle until I got to the second buoy. By then, I had swallowed enough seawater to become isotonic to the ocean, and so I switched back to backstroke until I reached the third buoy. From there, it was a turn for home and a mad dash to get there. To my chagrin, I kept swimming into a pontoon meant to keep us on course. Somehow, it was also supposed to save us from drowning. I say somehow, because my head was a magnet for it, and I am fairly certain I was most likely to drown from hitting it. The best part of all was that the crew kept yelling encouragement to me as I continued to collide with the boat.

I finally, somehow, made it to shore.

Nobody will tell you this, but the first time you attempt to run on the beach after having swum for 25+ minutes, your legs will not work appropriately. Forget graceful Baywatch-style prancing through the surf. No. You will look like a grave hag stumbling through a vat of molasses. So don't worry about it, just struggle your way over to transition and you'll be fine. Your legs will begin to work properly once you've made it to the bike mount line.

At least, that's how it worked for me. T1 (first transition) took me longer than it should have, because I still hadn't decided whether or not I needed socks. Once I realized I couldn't get my socks on my wet feet, nor my bike gloves on my wet hands, I decided I really needed neither, and so gave up on those as a lost cause. I ate a quick snack as I ran my bike to the mount line, chugged half my water bottle, and got up in the saddle as quickly as I could manage without face-planting.

I took off on my bike, having only ridden it twice before this day (gear and derailleur failures on my previous bike left me in the lurch, and thankfully I ended up with the most incredible piece of carbon fiber and French ingenuity I could have ever imagined), and promptly realized I had no concept of pace. I knew I had some time to make up, given that my swim portion had been quite slow, but I also knew that I needed to keep something in the tank for the run portion. As a result, I kept my effort level relatively low for the first few miles of the 13-mile bike loop, with the thought that I would pick up the speed towards the end. 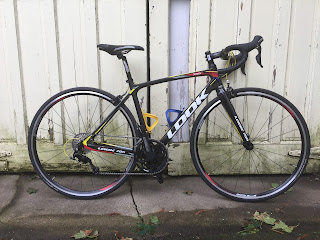 This was a great idea, but again, I had no idea what my pace was (I didn't have a bike computer and my FitBit seemed to think we were out for a leisurely hike, so that was a non-starter). I passed somewhere between 10 and 15 people on the bike portion, but overall wasn't really pushing myself too hard. There were a number of decent hills and climbs (so much for the "gently rolling" course description) that hampered my effort.

T2 (second transition) was not significantly quicker, because for some absurd reason I felt the need to revisit the sock debate. The socks made it on this time, but I should probably have not brought compression socks -- they took a little too long to get on. I swapped my helmet for my hat, and took off running.

Almost immediately, I realized I was in trouble. I hadn't drank anything during the bike portion, and my vision was getting fuzzy. I realized I may have triggered a migraine by allowing myself to get dehydrated, and so I stopped at the water station on course and double-fisted glasses of water. Thankfully, the wonky vision resolved itself around the two-mile mark, and I was able to finish strong. About a half mile from the finish line, I spotted my mom and waved, and then noticed that a very familiar SUV was trying to turn onto the race course. As it turns out, that was my dad. A police officer began to yell at him, which mortified his girlfriend, but caused my mom and I to laugh uncontrollably. 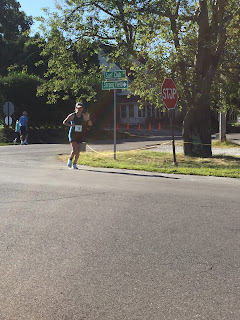 Half a mile from the finish -- big smiles. 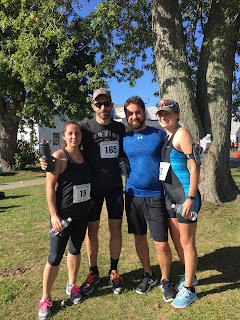 Smiling because we were on our way to get steamed cheeseburgers next.

I can't believe how much fun we had, and how much we learned during that first triathlon. I have since done one more since then (OCY Westerly Triathlon 2017 -- 2nd in my age group and 12th of 25 females overall, with a time of 1:32:00), and was able to put all that I had learned to good use. Pacing is still a bit of a problem for me, but I'm now able to swim a full 880 yards freestyle, non-stop. No more backstroke here!

Want to hear another secret?

If I could manage that, then so can you.

-----
*We settled on two -- left arm and right calf. We had considered marking all four limbs, just in case there was a terrible shark attack and we needed to re-attach arms. Thankfully, that wasn't necessary.
at March 22, 2018

After the general misery that was part of my first triathlon of this season, I knew I needed to take my training a little more seriously and... 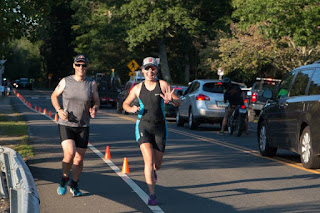 Proud ambassador and member of the Honey Stinger Hive